True to my childhood dreams — and, I might add, my original idea — I have immersed myself in the Amazon Rainforest.

If you start from the beginning of my posts and read until the end, you’ll find there’s quite a large gap in writing starting from around mid 2012 until late 2013. One might be able to infer what had happened — I was in the middle of writing posts in the Amazon when suddenly, poof. No more posts. Some assumed I had died. I have not.

What really happened was this: I began my Amazonian adventures with hitchhiking on the Trans-Amazonian highway, which is, you’ll find, reasonably well-documented on this site. I built a raft, intending to float down the rivers Tapajós and Amazon to Macapá, where I would continue my hitchhiking to French Guyana.

This hitchhiking never took place. The raft, however, certainly did. And for me, it was a gateway to the vast rainforests of the Amazon. You can read a few hastily summarized posts about the era of the raft, marked early to mid 2012.

I floated, starry-eyed, in my raft down the Tapajós River, and all was well. But I never made it as far as Macapá. I never even made it to Santarem, at the mouth of the Tapajós River. Instead I floated as far as Aveiro, where I came across some technical difficulties and discovered a few critical design flaws in my beloved contraption. In a nutshell, my raft was kaput. Undeterred, I immediately set out to find another suitable form of water transportation — preferably one that didn’t weigh several tons and handle like an oil tanker.  After two months of toiling and drinking heavily, I found the solution.

4.5 meters from bow to prow, made from the jungle wood itauba, my canoe has been a portal to adventures ad infinetum in the jungles of Brazil. And since April 2012, I’ve paddled her many, many miles, from the blue waters of the Tapajós to the silt-ridden Amazon, up the mighty paranás of Ramos and Uariá, down the mosquito-ridden Madeira, and up the jet-black, island-choked Rio Negro. And the best part is, I’m just getting warmed up.

Now, how did I manage to get my hands on this wooden adventure machine? I had no money when I got to Aveiro. The answer is quite simple. I traded my laptop computer for it, and I also worked hauling buckets of wet cement around to build a second story on some guys house.

Hence, no more posts. I made a few halfhearted attempts as far as Parintins, but I never had enough money for Internet cafes. And so, HitchTheWorld died for awhile. But now, thanks to a new vigor and drive, and the realization that if I don’t keep writing this shit down nobody will ever believe me, it’s come back to life.

In addition to paddling, which has always been my primary form of propulsion, I have also rigged a small sail, which I use during favorable winds (unfortunately, not able to sail against the wind with this rig). Ratio of sail time to paddling time varies depending on the river. For example, on the Amazon in the dry season, the ratio is 70:30 (sail to paddle). But on most other rivers, it’s more like 20:80. The Amazon is a very windy river. 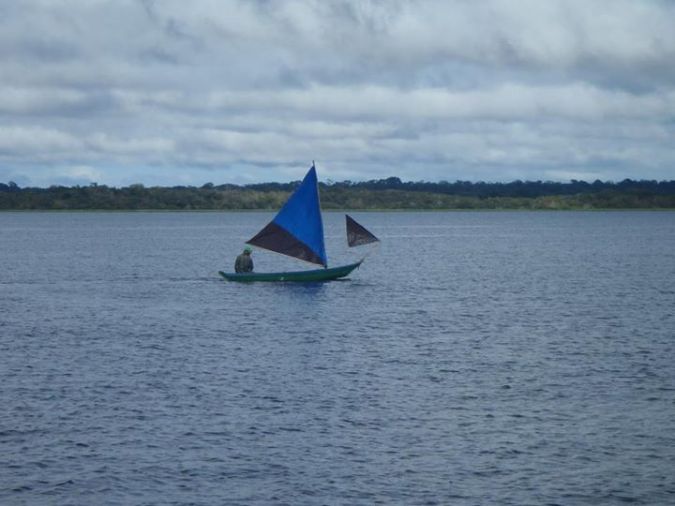 Sailing rig on the canoe in Maués, Amazonas — minus the jib, which I have since found to be rather useless and just a pain in the ass to set up.

I have worked out, on those long days of river travel, the amount of strokes I must have paddled since leaving Itaituba two years ago:

My average paddle stroke takes me forward 1 meter. Sometimes, a lot more (going downriver). Sometimes, a lot less (fighting heavy currents upriver). So, to go 1 kilometer, I must paddle 1,000 strokes. I have traveled 3,767 kilometers — out of these, no more than 600 were sailed. So I have paddled around 3,167 kilometers, which means I have made about 3,167,000 strokes — and that’s not including all the times I’ve paddled out to check fishing nets, or hunt in the igapó, or cross to town from the island I’ve been camping on for three weeks. So, we’ll call it an even 3.5 million paddle strokes in two years.

How do I manage to survive on these trips? I fish and hunt for my food, and gleam information about the river ahead from any locals I come across. I generally spend between 20 and 40 days at a time on the river.

I am also accepting applications from anybody who would like to paddle with me on a leg of the trip. I have space for one person, and I can always use an extra pair of hands. Send me an email if you’re interested. First tell me about yourself, though.

Fish. Camp. Hunt. Eat. Drink. Sleep. Paddle, paddle paddle paddle. This is my current lifestyle. Enjoy the old writings about hitchhiking. Those were the days, to be sure. But for the next few years, the word “hitchhiking” will be used sparingly. 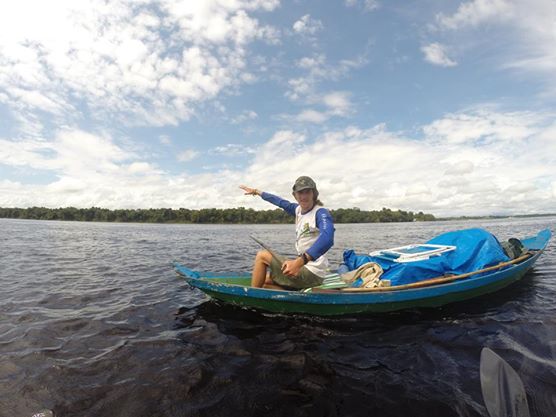 To reflect this shift in the contents of the writing, posts related to my canoe adventures will be posted in the category “Canoeing in the Amazon,” as well as the original country category.

2 thoughts on “Canoeing in the Amazon Basin”