“You can’t change the past, and you can’t predict the future,” said Adrianna lightly as we sped down the highway towards La Esperanza. I nodded in agreement as I puffed on my cigarette, the blue smoke forming arbitrary swirls and shapes in the still air around me. My driver veered her small black Toyota around a slow-moving semi truck ahead of us and whizzed on into the glowing red sunset.

Adrianna had picked me up hitchhiking outside the small Patagonian town of Rio Turbio in southern Argentina. She was a slight woman in her late thirties, with wrists as thin as rails and fingers like twigs. These were decorated with a variety of different silver bracelets and rings. She dressed formally, wearing a dark button-up trench coat over a silken blouse, a flowing black and white skirt, and three-inch high heels to top it all off. Despite her slight figure, Adrianna moved with grace and eloquence; her every motion was lithe and fluid.

“The problem with many people today,” continued Adrianna, lighting a cigarette off the red-hot coils of the car lighter, “is that they live in the past and think in the future. And when you behave as such, where does this leave you?”

“It leaves you unable to accomplish anything,” I responded. “If you only live in the past and think in the future, you’ve no time for the present. Which is when things actually get done.”

“Exactly!” She threw up her arms in exasperation, then hastily put them back on the wheel when we began swerving off the road. “I see it every day – men who are sixty or older, with nothing to tell about except for the things they wish they would have done and the things they are planning on doing! You must either live for the moment, or die leaving nothing but a life of regrets in your wake.”

Adrianna was a talkative woman. She worked for the judicial system in Rio Turbio, but at that time was on her way to nearby Rio Gallegos to bring her children back home, whom were away visiting their father for the weekend. My wispy yet sublime driver was a divorced mother of four; according to her, the reason for a marriage of fifteen years ending was simply “insurmountable differences.”

She later clarified. “It’s not like I hate him or anything,” said Adrianna of her husband. “We had this nice big house, and he was always nice to me. But the thing was, with a big house, four very small children, and no maid of our own, whose responsibility was it to keep everything in order? Mine. So it didn’t matter that we had a nice home – I was stuck with all the cleaning while he was at work or out with his friends.

“Don’t get me wrong – I’ve nothing against keeping a clean home and doing a little scrubbing every now and then. But pretty soon, that’s all I was doing. The scrubbing, the washing, the putting away.” She shook her head and pointed at me with her cigarette. “I’m an independent woman. I hate pre-established, gender-based roles in any marriage, especially my own. If you’re going to be with me, you’re going to share the duties. That was just something he wasn’t willing to do.” She sighed and ran her fingers through her long brown hair. “So I left him. And now I’m taking care of all four children by myself.” She rolled her eyes, then gave a little laugh. “But even they do more chores that he did.”

Adrianna’s four children were usually quite well-behaved. “They don’t drink or smoke,” she said contentedly, “and they usually listen to me when I ask them to do something. They’re helpful. Still, there is a major problem – they don’t know anything about anything!” She dragged on her cigarette, then exhaled sharply, as if she had a grudge against the smoke. “The schools don’t teach them squat – actually, none of them have even been to class in almost six months since all of the teachers in the town are on strike.” This seemed to remind Adrianna of her unhappiness with the present state of the Argentine government, and she digressed for a few moments on why Argentina is and never will be ready for democracy (“So many Argentines are, for lack of a better word, stupid. The only way this country is ever going to see any social progress is with a government that has clear-cut rules and specific laws to obstruct frivolous six month strikes like this one”).

After a round-about circle of mostly one sided conversation, Adrianna returned to her original topic.

“Anyways, my children. Like I said, they’re mostly wonderful, and I love them very much; the problem is, they’ve never been further away than Rio Gallegos. All they know is the little world they live in, the closed world of Patagonia, where every other person is a shepherd and the most interesting thing that’s happened all year was the rodeo.

“My oldest son (he’s sixteen) could really use an attitude readjustment. Next year I think I’m going to send him to Spain to live with my sister for a few years. I hope when he gets back he’ll have an open mind, because he sure as hell doesn’t have one now”. She raised her eyebrows and looked at me. “Do you know what I heard him say last week?”

“One of our neighbors (who’s Chilean), was over at the house for lunch. We were just eating, and enjoying our afternoon, when my son called her something terribly offensive.” She clenched her jaw. “Una chilota*. My son! Calling my friend a chilota, and right to her face! He sure paid for that one, though,” she pursed her lips, and then gave a little chuckle. “I won’t be doing any housework at all for the next couple of months! I’ll be sure to cook lots of food in pans, so he’ll have plenty of scrubbing to do.”

(*) Chilota is a derogatory word used by some Argentines for the Chilean people. It can also be used as an insult for an Argentine person, as in “Eres solo una puta chilota.” In Chile the word is also used, but it’s in reference to people from the island of Chiloé and is not considered offensive. However, in Argentina it’s a strong insult, especially if used against a Chilean.

“He really is a good boy, though. It’s just the close-mindedness that a small town like Rio Turbio leaves with a person with. That’s why I want to send him to Spain. It’ll do him nothing but good to get out of Patagonia for a few years.”

Adrianna was a strong-spirited woman, no doubt about it. She later elaborated on her love for books, history, and languages. “I lived in Spain for eight years, and Germany for two. During those ten years in Europe, I learned Italian, German, French, and Catalán, a Spanish dialect spoken in Barcelona. Beautiful language.”  She stubbed out her cigarette in the car astray and went on. “You know what’s funny? I never learned English. I’ve always found it to be too harsh, too impersonal, you know? To be expressive in English is like trying to be expressive in binary code. But to be expressive in Italian – now that’s where the soul really comes out.”

Adrianna had a love for travel, and said that you’ve never really lived until you’ve left your hometown an ocean away and leapt blindly into a far-off land. I was in complete agreement.

“I first moved to Spain when I was fifteen,” she said with a nostalgic smile. “I learned so much, not just from being there, but from travelling around the surrounding areas. It really shaped who I am today.” She zoomed past another lumbering semi, then said to me, “There is a common misconception about the act of travelling; to he who has never been out of his own providence, much less his country, travelling is simply moving from one place to another.” She waggled her index finger at me and shook her head so that her silver earrings made bell-like noises. “No, to travel is to learn – and not just about the world around you or the places you visit. To travel is to learn about yourself.”

No matter what we discussed, the recurring theme with Adrianna seemed to be this: it’s imperative that you live for the moment. I found this a little strange coming from a woman with her background and position, and wondered about it for almost the entire ride. Finally, near the end, the answer was finally revealed.

“I have cancer,” said Adrianna offhandedly in the middle of a monologue about socialized health care. At first what she said didn’t really register with me; I thought maybe I had misheard her, or mixed something up in my mental translations.  But the Spanish word for cancer is cancer; you can’t mix that one up.

“It’s no big deal, really,” she said with a dismissive wave. “They found it a couple of years ago, and anyways it’s stable now. It hasn’t really affected me at all, in case you’re wondering. I did the cancer jig for about a year; you know, went to chemotherapy, lost some hair, got stuck with a bunch of needles. But I wasn’t like you’d expect me to be, or even how I expected myself to be. I didn’t feel depressed, or upset, or even a little bit down.”

“How come?” I asked. “Being diagnosed with cancer is pretty depressing news.”

“Well, I’ve got several theories.” Adrianna downshifted and rocketed around a hillside turn. “First off, I knew for sure that I wasn’t going to die anytime soon, at least not from cancer. But I think the real reason I felt the way I did was because I’ve always lived for the moment.” She banged her hands on the steering wheel for emphasis, one for each word.

“I’ve been that way all my life, ever since I was a little girl. So I figured that even if I would’ve died of cancer, I wouldn’t have had a single regret. I’ve done what I wanted to do, and more importantly, I’ve enjoyed it. Of course, there’s still a lot left for me experience…but what really matters is how you spent the time you had. I say: live to live, not to plan. It’s as simple as that.”

It really was, wasn’t it?

Adrianna was an unstable woman with many, many issues. But damnit, she lived life how she wanted to, despite the many obsticles she had to overcome; I respected that.

My talkative, opinionated, divorced mother-of-four driver dropped me off at La Esperanza around ten pm and sped off into the freezing night towards Rio Gallegos, leaving me slightly confused yet nonetheless with a renewed appreciation for life in general. 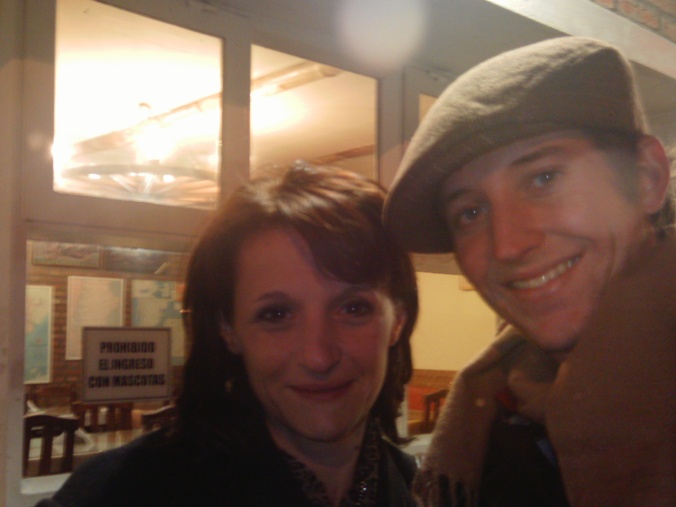 Adrianna and I in La Esperanza, Argentina