You know, it was nice to have money at first, but I’m getting totally spoiled. Good thing this is my last dollar…

The rain in Macas cleared up by morning and I left around 11:30, since I slept late because these hotels don’t have wake-up call service. Whenever I sleep in a bed, I’m never up before ten or eleven. Thats why I like to camp; every day starts at sunrise.

I walked for about twenty minutes before getting a lift to Sucùa, where I stopped and bought myself some lunch. After this, a large truck brought me about twenty minutes down the road, turned at a fork, and left me in the middle of nowhere. This way just fine with me, since I like to walk in remote places. I took the oppertunity to take several nice photos of plants for my Ma, and then hopped in the back of a pickup to El Tesoro. I wandered around in this small town for awhile and eventualy found another truck to pick me up. I rode for a long time in the back, and drifted off to sleep for awhile.

When I woke up, I realized we may have gone off the beaten track a bit. We were on a small gravel road surrounded by nothing but mountianous jungle. Hm. Where was I?

I got out of the truck here, and then the driver demanded two dollars. What? Why? He told me that he was a taxi! I told him I didn’t see any taxi cabs here, just an old beat-up pickup with a cracked windshield idleing on a muddy road. Where’s the sign that says “taxi,” mate?

I ended up paying him to avoid any trouble. He could probably get away with bashing my head in and taking my camera this far away from…well…anything.

I walked for a bit down this small, muddy gravel path. The next car that drove by picked me up, thankfully. Inside were Alberto and his son Jorge. Alberto was a square man, from his hips to his moustache. He spoke very good English, and told me that he lived in New York City for twenty-five years, proudy showing me his New York State drivers licence. We drove for awhile until we reached the town of San Juan Bosco, where Alberto lived and owned a small resturaunt. He told me I was welcome to stay as long as I liked, and that I could have as much free food at his resturaunt that I wanted. Nice…

So I decided to stay the night. Alberto left for a few hours to go do something, and I decided to go exploring down by the creek. I whipped off my shoes and began walking upstream, hoping to find a snake or something.

I saw many brilliantly coloured tropical butterflies, none of which would stay still long enough for me to get a good photo. I did, however, see a bunch of strange looking small black bees congregated on the underside of a few leaves, their obvious stingers pulsating as I got closer for a photo.

I wonder what species they are

I returned to the resturaunt several hours later, pants wet, covered in mosquito bites, but totally content. A good walk along a rocky stream always clears my head, even if I do slip several times on alge-covered rocks and reopen that spider-bite on my foot that I got in Colombia and that was almost healed.

I got a nice free meal and then went to attempt to put some more photos online. However, the computer wouldn’t have it, so I went back to the resturaunt and watched Saving Private Ryan in Spanish (“Ahorro de Soldado Ryan”) and ate chocolate for the first time in months. That made me really appriciate the flavour, and I gorged myself on three bars. Later, I went to sleep in the upstairs room.

Next day, I left for Zamora. After inquiring for directions from several different people, I was pointed to a small gravel road. It didn’t really look like the main road but I tried it anyways.I followed it for a bit, until it dwindled away to nothing.

Not the main road

There was only one other option, so I backtracked and took the only other road. Hm. This didn’t look like the main road, either. I asked a passerby, just in case.

‘Are you positive this is the main road?’ He said it was, and I soon  passed a sign that said “Feliz Viaje!” (Happy Travels.) They always put these signs on the outskirts of town in Latin America, so I figured that this was, in fact, the main road.

I was hours, before I saw another person, and hours more before I saw a car. Thankfully, this car pulled over and brought me about ten kilometers farther into the middle of nowhere. The going was slow, as the road was very bad. When I got off, I walked some more.

I was melting as the hot ecuatorial sun beat mercilessly down on me. I was getting really thirsty, to the point where I thought I might have a heatstroke if I didn’t get any water soon. So I stopped at one of the numerous small waterfalls that cascaded down the side of the road.

The water looked so cool, and clear…That’s it, I didn’t care if I got dysentary, I was getting a damn drink. I bent down and drank thirstily, the cool water feeling wonderful on my parched throat. As of yet, I haven’t sufered any ill effects, and I hope that I don’t in the future. Besides, that was such a rural and remote place…no risk of human contaminates, at least…

Eventually another vehicle passed and picked me up, driving me for many hours down the tiny road. Finally, we came to a town. Actual paved roads! Cool! So I got off here and continued my trek to Zamora. The name of the town was Chiguindal, and the small road leading out of it was nearly as deserted as the road leading to it. I got a few short rides, passed a police checkpoint, and then rested in the shade for awhile. I played with my camera, smoked a couple cigarettes, and got picked up about an hour later. 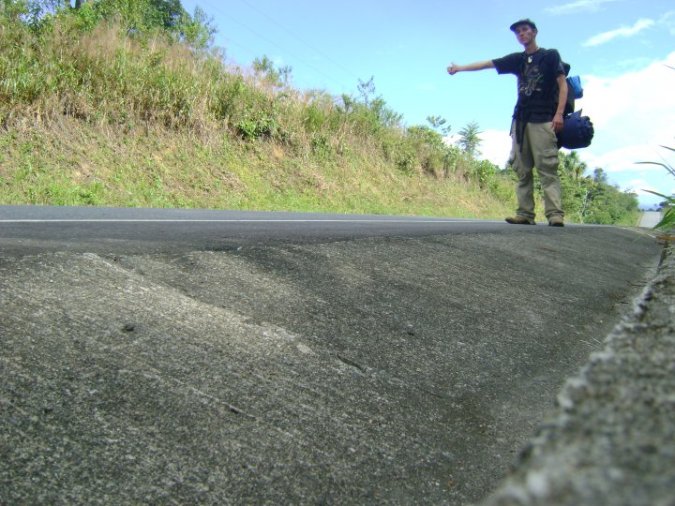 I enjoy my lifestyle

The guy who picked me up was an old fellow with a perpetual smile and a ragged straw hat. He was very cheerful, and stopped several times to take photos of the scenery. I did as well.

These clouds have silver linings in a very literal sense

We rode for about forty-five minutes to the town of Yantaza, where Patricio was kind enough to share a hotel room with me. We got some dinner, and Patricio went to bed while I tackeled the Internet for attempt number two at putting photos on there.

After hours of frustration, I gave up and went to sleep. This morning, I tried again, but to no avail. I left Yantaza around one o’clock and continued south to Zamora. I made it there in short notice, where I finally succeded in posting my pictures (Patrick: 1. Slow Internet coupled with computers from the 90’s: 0.)

I headed out of Zamora at around five o’clock (I know this because there is a giant clock that must be a hundred feet across built into a hillside in Zamora). 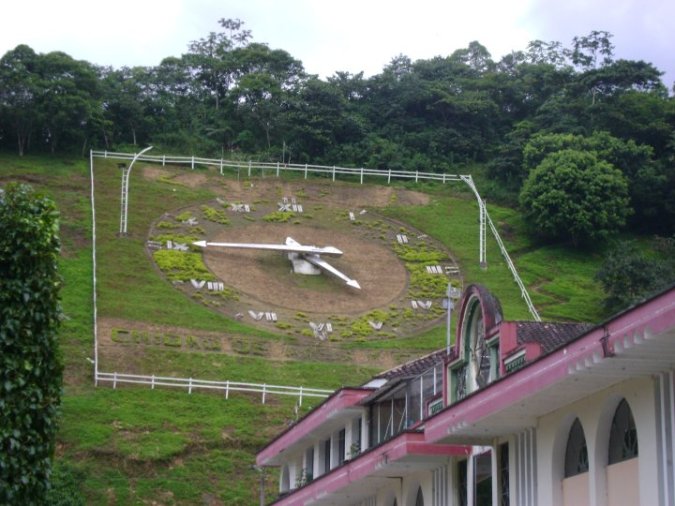 It really is quite a large clock

I hitched onto a car with some older folks and we drove on a seemingly endless mountian road, and were stopped for close to an hour due to construction workers repairing some rather severe damage from a landslide. We arrived to Loja around twilight.

I spent my last five dollars on a hotel here, since I have the money and I may as well use it. Plus, it’s rather a large city, and I don’t feel like trampin’ it in the park tonight. Now I am back to being totally broke, and I must say I am relieved. The birthday money was spoiling me, and I was spending it on stupid hotels and friviolus Internet time. It’s good to be poor again!