Finally, El Salvador is behind me.

After being bounced from place to place over the past week, I’ve finally managed to collect my new passport and get the hell out of dodge. It was a relief to legally cross into Honduras earlier today, as much fun as I had going for all those swims…

So I’ll fill you in on my week in San Salvador. First, I was just going to stay with Eric for the week. I was with him at his house for a few days, and I got to chill with his family and stuff. It was pretty nice. We even went to some church group that he goes to every week, which I normally don’t enjoy, but this time it was pretty cool…we just kind of hung out more than studied the Bible. Plus…free snacks. Later in the week we even went to Salvadorian Wal-Mart, where the lady who worked there tried to get me to buy thong underwear instead of boxers (for the bulge! she said. Awkward…)

Then, one day, Eric told me that he needed to go to Guatemala for a few days, and that I wouldn’t be able to stay at his house anymore. Suckage, he had hot water! However, he did organize another place for me to stay for the rest of the week.

It was with some missionaries who give shelter to troubled youth, or something like that. They seemed pretty cool at first. I got to use the Internet all I wanted, (a big plus) and I could go for walks.

One one of my walks, I went past this crazy raving homeless guy with scabs on his head who followed me for three solid blocks, past the traffic circle, and halfway down my street. I almost had to beat the tar out of him because he hept touching me and shouting “Vamos con la avion!” loudly into my ear. Pinche loco cabrron…

So I was at this place for like, three days. Then, one morning, I woke up and there was nobody around. All the doors were locked, and I was shut in. Huh. So I waited around for about an hour to see if anybody was coming back. After nobody did, I decided to make myself some breakfast, as I was getting quite famished.

I grabbed a pan, tossed some butter in it, and whipped me up some eggs, hot dogs, and toast. I was halfway through my meal when the owners came back, took one look at me eating my meal, and told me I had to leave.

Apparently, you’re not supposed to go into the fridge without permission. And I broke that rule. One time.

Well, first of all, I didn’t even know that was a rule until he told me, second, there was nobody around, and I didn’t know if they were going to be gone all day or what. Third, haven’t you ever heard of three strikes? Or at least a warning? If you see someone breaking a rule, you tell them not to do it. If they do it again, THEN you can kick them out. You don’t just say, “Hey, didn’t you know that’s against the rules? Get out.”

Kicked out for an illegal breakfast.

So after the Refrigerator Nazis kicked me out, I had to spend the last tiny bit of money I had left on a cab back to Eric’s house. (the cabbie tried to gouge me and charge me ten bucks, but I told him to go piss on an electric fence and gave him five. It was only like, four miles!) When I got there, Eric wasn’t home, so I decided to go find a place to do some covert camping for the night.

I came across a nice, tucked-back vacant lot that would be perfect. So I cloaked my pack under some leaf litter, and went to explore my new surroundings, as it was only about noon. As I was walking past Eric’s neighborhood, I actually ran into Eric himself, which was fortunate.

He told me the Refrigerator Nazis called him, and that he figured it was just a misunderstanding. Doubt it, but OK. He invited me back to his place for some lunch. I obliged.

After eating, Eric told me he might have found another place for me to stay. You gotta love this guy, he just never gives up! He tells me there’s a church we have to go to to meet these people. All of Eric’s contacts seem to be deeply religious…

So we go and recover my pack, and head to this church. It’s insisted that I come inside, which I reluctantly did.

Hoo boy, this was definently not my kind of church.

There’s this guy up on the stage, shouting loudly in Spanish into the microphone, his voice amplified by two double stack Peavy speakers. Totally unnecessary, as nobody in the audience was more than twenty feet away from him. Little bit louder, man, I don’t think Colombia can hear you…

So this guy goes on and on for a bit. Then suddenly, it’s as if his brain gets stuck on one word…

There’s a scratch on his brain, right on the words “and victory.” That needle just can’t seem to get past it…

Finally, it skipped ahead. ‘Bout time, I was starting to get annoyed…

My mind wanders for a bit. Then it happens again…

This time, it’s on the word strong. “Victory?” “Strong?” Is this church or a Communist Party rally?

Come on needle…skip ahead already…

Must be a big fucking scratch…

Aaaaand I’ve had enough. I’m going outside to smoke a cigarette.

So I did. After the service was over, Eric introduced me to the guys I was going to be staying with for the remainder of the week. Turns out, one of them is the guy who was shouting into the microphone.

So we head over to his place, which is a discipleship where he and two other guys live. I was thinking, this is going to suck. They’re going to be preaching at me all day every day for the next three days. Great.

Well, ladies and germs, I was wrong on this one. Turns out, those three guys were some pretty cool dudes. All of them were reformed crimminals, and all of them had spent a good chunk of time in the slammer back in the day. And they were covered in tattoos! (at least one of them was.) Plus, they were form California. American accents, baby. Tight.

I actually had a great time with them. Hardly any preaching, really. They were some really funny dudes. There was Madrano, (the microphone guy,) Victor, (tattoos) and Carlos. We pretty much just chilled and watched movies the whole time.

So before it was time for me to leave, I took me a trip to the beach, via bus. It was AWESOME. The beach was in Tamanique, and called Playa el Tunco. 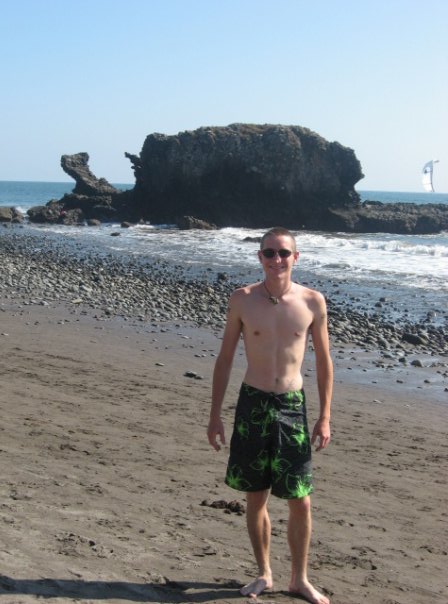 The rock in the background is called Roca Zunsal because it apparently looks like a pig. I personally thought it looked more like a rinocerous beetle.

I love the Pacific beaches of Mèxico and Central America…the water is always warm and the surfing is great! 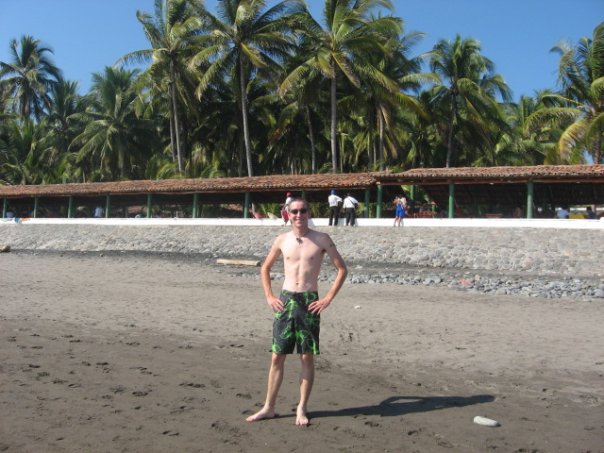 I actually ended up running into some people I knew there!

Remember those college kids I told you about, the ones that made me peanut butter and jelly sandwiches when I was first stuck in San Salvador? I totally saw them there! I was out catching some waves, and BAM there they were, out doing the same thing!

It was fantastic; We chilled in the water for awhile, then they said they had to go…something about having to be back before dark. While they were returning their boards, this guy (who worked at the board rental place) asked me if I was looking for any weed. I told him sure, but I didn’t have any money. Sad. But wait! My friends might want some!

I asked them, and they said hell yeah! So we definately smoked some good weed out of a soda can like crackheads on this random dirt road in El Salvador. Ha. Good fun.

So then my buddies had to go. I said nos vemos, and went back to the private beach club I was staying at, (Eric was a member…so I got to feel all ritzy walking up the ramp leading off the beach that said “private club,”) got me a free sandwich, then smoked a cigarette while I watched the sun go down. Perfect day, man.

So then this morning, Eric came and picked me up from the discipleship house. I said bye to my suprisingly cool new friends, picked up my new passport (which was a day early…finally, the U.S. Embassy is on top of things) and hit the road, Jack. Later, El Salvador!

I made it to the Honduran border in a couple of hours. First, got a short but sweet ride which included eye candy in the passenger seat and actual candy upon departure, and then I hitched a little SUV like thing all the way to where I am now, Coluteca. These guys are super cool, from Guatemala. They bought me Pizza Hut, and shared their super nice hotel room with me!

Oh, by the way, Pizza Hut in Honduras is waaaay nicer than Pizza Hut in USA. It’s like, a really nice resturaunt! There’s more than just pizza and wings on the menu, there’s actual entreès! And I don’t know if it’s just because I haven’t had Pizza Hut in four or five months, but I think it tasted better here, too.

So tomorrow, I should be able to cross into Nicaragua. Wish me luck, friends!

EDIT SEPT 2011: The only thing I have to say is: Why did I think it was necessary to stay in San Salvador the whole week I was waiting? Why didn’t I go hitch around to other parts of the country? Why did I rely on Eric to find me places to stay? I’ll never know…