“You just shut off the WiFi,” brag useless blobs.

CHICAGO—After popular satirical newspaper The Onion began forcing its online readers to subscribe after reading only five articles of what the publication calls “probing and analytical journalism,” frustrated fans were forced to develop some sneaky tricks to get around the site’s attempt to generate revenue. 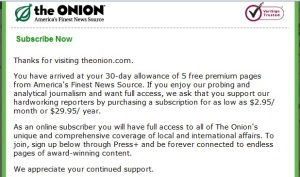 Before the ingenious bypasses were developed, pop-up windows like this had been pissing off cheap assholes for months

22-year-old Aaron Slovenski, a lump of wretched Internet-addicted slime from Chicago, was the first to devise an underhanded technique to skirt the ludicrous money-grabbing subscribe feature of The Onion.

“It’s really fucking easy,” Slovenski tells HitchTheWorld reporters from the depths of his cave-like basement room, lighted only by the perpetual glow of the $10,000 dollar gaming computer his mother bought him for Christmas. “You just quickly copy the text from the page before their robot recognizes you’ve viewed more than five articles.” Slovenski goes on to reveal the final step as “pasting it onto Microsoft Word.”

Slovenski justified his technological shenanigans, stating, “The Onion has more than 400,000 subscribers already; why do they need another $2.95 from me?”  He went on to call the editors of The Onion “total dicks” as he gave a pig-like snort and polished off his 24th bag of Doritos in eight minutes.

Slovenski isn’t the only Internet slob who was upset when The Onion began sucking, vacuum-like, more money from its online audience.

Fitch, while initially utilizing Slovenski’s Microsoft Word technique, has recently come up with another devious modus operandi to flaunt The Onion’s subscribe robot.

“You just load the page and shut off the WiFi!” he laughs snobbishly. “Then the robot can’t reroute you to the home page since you’re not online.” The diabolical simplicity of it all left HitchTheWorld reporters in awe.

Fitch’s technique has been hailed by trolls and other Internet losers around the world as “way better” than the Slovenski Method, since it takes less time to execute. 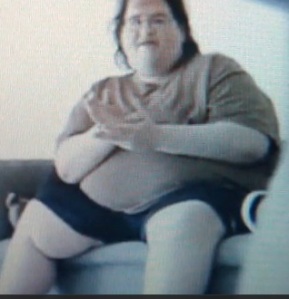 “I always use the Fitch,” says Vampyric Spektor, perhaps one of the biggest online imbeciles in the history of recorded time. “It’s just faster. Slovenski is a noob – I can beat his sorry ass any day,” he bragged from his filth-covered hovel somewhere in Oklahoma.

Thanks to these worthless humans from the Midwest, stingy assholes around the world can enjoy all of the humorous articles the publication is famous for while chain-smoking and putting off going outside.

Administrators from The Onion could not be reached for comment, though it is assumed they are extremely pissed off about the whole issue.